Siberia occupies a huge territory about 5.2 million square miles with a wide variety of climatic conditions and geographic landscapes which roughly corresponds to about 9 percent of Earth's dry land mass. It is bounded by the Ural Mountains in the west and by the Pacific Ocean in the east. To the south lies central Asia, Mongolia, and China, and to the north the Arctic Ocean. Apart from the Russian-speaking Siberians, about one-twentieth of the population consists of aboriginal groups. To better understand the food and meal traditions of the Siberian people, it is necessary to review the geography, climate, and the history of this region. 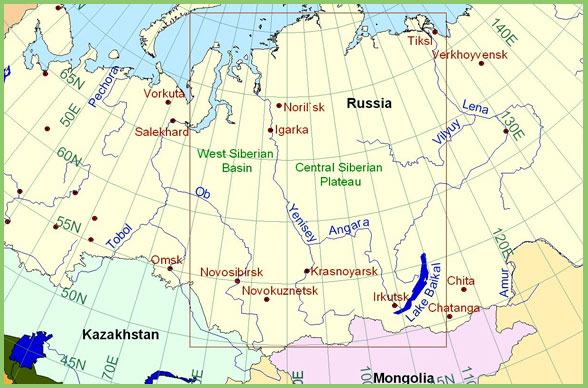 Eastern Siberia is included Irkutsk, Lake Baikal and Republic of Buryatia, Russia and Irkutsk, Lake Baikal and Ulan – Ude are famous as one of the stopover destination of Trans – Siberia and Trans – Mongolian train route.  Selena Travel features Eastern Siberia with its tours offered on the website.
Irkutsk has over 600,000 people and is located on the Angara River. It is the starting point for many who adventure to the Lake Baikal area because it is a major point on the Trans-Siberian/Trans-Mongolian train route. Founded by Russians in 1652 as a major fort beyond the Ural Mountains, it was populated by exiled political prisoners sent by the tsars and communists. Today, the city has become a college town with many young people attending universities there.

It is the largest freshwater lake in the world with an average depth of 744.4 m (2,442 ft) and contains roughly 20 percent of the world´s surface fresh water. The body of water is also known as the “Baikal Sea” and the "Pearl of Siberia". At 1,642 meters (5,390 ft) Lake Baikal is the deepest, and among the clearest lakes in the world. At more than 25 million years old, Baikal is also the world´s oldest lake. Baikal is home to more than 1,700 species of plants and animals, two thirds of which can be found nowhere else in the world and was declared a UNESCO World Heritage Site in 1996.