Mongolia is located in the plateau of Central Asia, between Russian Siberia and China, and covers an area of 1.566.500 sq.km, which is roughly the size of Western Europe in which has immeasurable huge grass of steppes, sand dunes, rocky and forest Mountain ranges.

The geography of the country is characterized by great diversity. From the north to the south, it can be divided into 6 areas: high mountain, taiga forest, mountain forest steppe, steppe, semi-desert and gobi desert. In contrast to most visitors’ expectations, much of the country’s territory is mountainous. 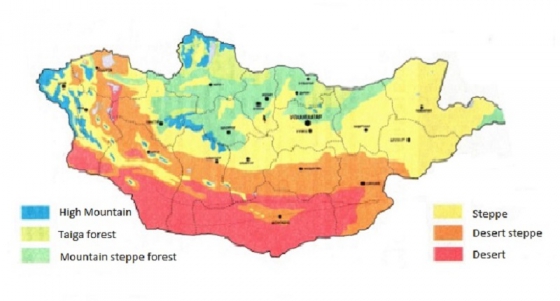 Traditionally, Mongolian lifestyle is based on nomadic lifestyle which consisted of various nomadic tribes. Moreover, Mongolians live under remarkably sunny and blue sky as the country enjoys 250 sunny days per year. The climate of Mongolia fluctuates with such extremity due to the location of the country as Mongolia is far from seas and oceans in the lee of surrounding Mountains, so the climate can be very dry and cold or very hot and dry.

In summer time, average temperature is 20 celcius and – 24 celsius in winter. The country has such fascinating yet diverse geographical features and cultures throughout the territory and captures the heart of everyone who travels through this mesmerizing country. 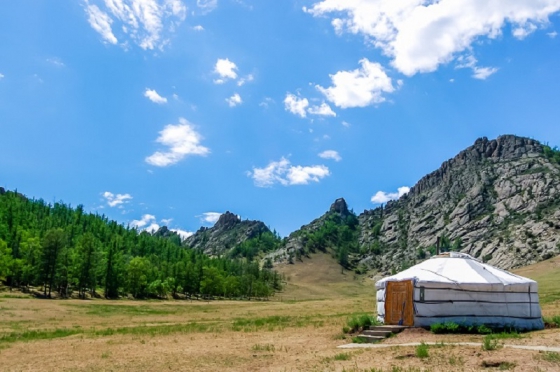 Mongolia’s best travel routes and attractions are classified into 6 main categories by the geographical locations: Ulaanbaatar and around, Southern Mongolia – the Gobi Desert region, Western Mongolia, Central Mongolia, Northern Mongolia and the Eastern Mongolia – Great Eastern Plains. Mongolian Culture is unique and dissimilar to anywhere else in the world. The combination of glorious history, nomadic civilization and its wonderful traditions and the pristine nature make Mongolia a truly special experience definitely not to be missed.

We at Selena Travel are ready to take you to Mongolia-the land of the blue skies, and show you the best of the unique nomadic culture, pristine nature, Buddhist traditions, and once in a lifetime authentic adventures!

Terrain: Vast semi –desert and plains, mountains are in the west and southwest, the Gobi Desert is south and southeast.

Climate: There are four well-defined seasons, and on average, the sun shines for well over 250 days a year. The climate is extremely continental with low precipitation. Average summer temperature is +20’C, average winter temperature is -26’C, average rainfall -200-220 mm. winter lasts from November to late April. Although winter is cold with lot of snowfall, it also has many sunny days.

Economy: Ttraditionally based on agriculture livestock breeding which is still one of the main industry in addition to ever-growing mining industry (mainly gold, coal, copper)

Religions: Buddhism is dominant nowadays, but traditionally Mongolians were shamanist which has been so deeply woven into Mongolian culture that many of its rituals and beliefs are found in everyday life. Some elements of Christianity and Islam are also found within some of the ethnic groups. The country`s population is “Buddhist-50%, Shamanist and Christians-6%, Muslim-4%, none/atheists 40% (2004)” - according to CIA world Fact book

Currency: Tugrik, All major currencies can be exchange at banks and licensed exchange centers in Ulaanbaatar. Credit cards are widely accepted at bigger hotels, restaurants and supermarkets.

Visa: Mongolia Visa is issued by Mongolian Embassies and Consulates abroad or can be obtained at the Chinggis Khaan international airport by those with a formal letter of invitation by a tour operator or corresponding organization or individuals.

Health: No specific requirements, however all visitors should ensure that they come to Mongolia with suitable international travel medical insurance

Insurance: All the visitors are recommended to purchase travel insurance with good coverage from insurance companies at his/her home country

Have a look at these and other amazing stats about Mongolia in the infographic below: