How to travel to eastern Siberia from Asia, Europe, Americas and Australia? There daily flights to Moscow from all major European capitals and New York, as well as from Hong Kong and other Asian travel centers. You can arrive in Irkutsk via Moscow or via Ulaanbaatar by flight. However, there has not connection flight from Ulaanbaatar. Arrive in Ulaanbaatar and getting around for 1 or few days and fly to Irkutsk by Aero Mongolia – domestic airline company.

The main western rail gateways to European Russia are Helsinki, Warsaw, Prague and Budapest. There is a daily service from Paris and Amsterdam to Moscow via Berlin and Warsaw. There's also a service from Berlin to Omsk. The Trans-Siberian Railway runs from Moscow to Vladivostok via Irkutsk as well as Tans Mongolian Railway and you can get a train from there to Beijing.
The most popular routes to reach Siberia is overland on train, and getting to Siberia overland on Trans Siberia or Trans Mongolian train is one of the lifetime experience. There is daily trains to Irkutsk from Ulaanbaatar and Moscow to Siberia.Alternatively, you can reach there by ong distance bus from other major Russian cities and from Ulaanbaatar, but it is not particularly popular with tourists as it’s rarely as pleasant, scenic and comfortable as the train. 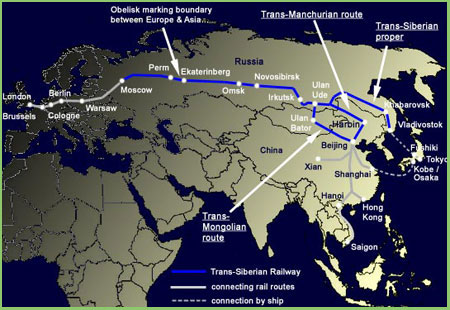