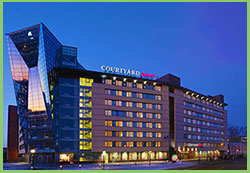 Courtyard Marriott Irkutsk City Centre Hotel opened in November 1, 2011, is within walking distance to the drama theatre,the first and by now the only international chain hotel in Irkutsk and the whole Lake Baikal area. It is about 75 km away from Listvyanka settlement, so you can do day trip to the Lake Baikal. Courtyard is only some 500 meters away from the Kirov square with 3 historical churches and in about 1,5 km from Karl Marks street which is the main commercial street of Irkutsk.It has 208 spacious guestrooms of different categories. Free Wi-Fi internet is available in the lobby and restaurants while high-speed access from the guestrooms is at extra charge. Courtyard would be the first and by now the only hotel in Irkutsk which offers guests non-smoking rooms. 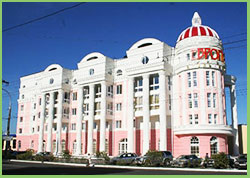 Hotel Europe is situated a bit away from Irkutsk city centre, close to large shopping mall, Irkutsk central park and is on the way from historical city centre to Irkutsk international airport.  The hotel was built in 2005 in a classic style and continues the best traditions of Irkutsk architecture. This 4 star hotel offers comfortable clean 67 rooms of different categories, are air-conditioned and equipped with private bathrooms, TV-sets and telephones and can guarantee the best service as for business as for leisure travellers. The offers European cuisine and local specialties. The restaurant offers 24-hour service. 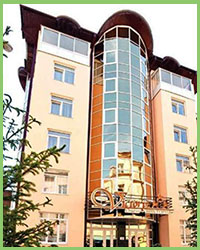 The Victoria (Victory) Hotel is a Russian-Swiss or quite new western-style hotel built in 2001 and located in the quiet area of the Chelyabinsk city, 15 minutes away from the city centre, just one block off the most central Karl Marks Street, it faces the busiest district of Irkutsk where many businesses including drug-stores, supermarkets, restaurants, shops, movie theatres are situated. Victoria Hotel is only some 10 minutes’ walk to Kirov square, the Angara river, the Central market and Uritskogo street which is the only pedestrian street in Irkutsk. Providing different kind of services, suitable for both business and entertainment purposes, this hotel will make your visit to the city as memorable and your stay as comfortable as possible.The hotel offers accommodation in 30 rooms of different categories including non-smoking rooms. The restaurant is marketed as Italian wine and cuisine restaurant. 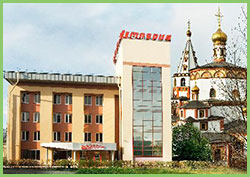 Emperia (Empire) Hotel is a small newly built hotel located in the most central historic part of Irkutsk on lower-embankment of the Angara River, near Kirov square and right behind Epiphany Cathedral. The area here is a mixture of residential houses and former industrial area with a functioning bakehouse that give fantastic smells in the mornings. The hotel offers the best opportunities for sightseeing of Irkutsk by foot. All of Irkutsk major historical sights and places of interest are concentrated in this area. The Irkutsk railway station is 2.5 km (1.5 mi) from the hotel, and Irkutsk international airport is in 6 km (4 mi). Emperia hotel has 50 comfortable rooms with modern equipment. Some of the hotel rooms also provide their guests a magnificent view to the Angara River in the place of its confluence with the Irkut River. 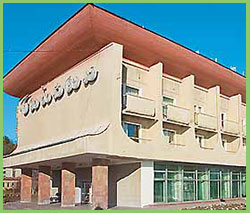 The Baikal hotel complex is located in the village of Listvyanka, probably the first hotel here, 70 km from Irkutsk on the shore of Lake Baikal. It used to belong to a former Intourist chain of hotels which was a Soviet time monopoly hosting all foreign guests in Soviet Russia. The three-floored hotel has everything necessary to make your stay at the lake as pleasant as possible. There are 56 cozy rooms (single, twin, double, deluxe rooms). The hotel is also not far from the Baikal museum, an interesting wooden church, a picture gallery, an observatory, the pier and bus station.Limnological museum, Shaman Rock viewpoint are in a walking distance from the hotel. There is a cable car to the viewpoint on top of the Chersky peak. Short downhill ski track is open during winter season. 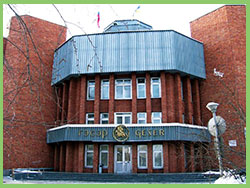 The Geser Hotel is considered to be the best accommodation option in Ulan-Ude, a major city east of Lake Baikal. Geser is the name of the hero of the Buryat epic poem. It was built in 1980 and used to be a hotel which served only government officials. Now, when Geser was renovated, it is open for all guests. It is quite popular among Russian and foreign travelers. The property is located in the most central part of Ulan-Ude, only 100 meters (330 ft) from the city’s central square. It stands aside the main street in a very green and quite park area.