The vast river valleys and great steppes of Central Mongolia are known as not only the cradle of Mongolian history and culture, but also several Asian nations hailed from here. That’s why the legendary Orkhon river valley is one of the UNESCO World heritage sites. Today the remains of the ancient cities of Uighur and Turkic empires are still found in Central Mongolia. The people live in Central Mongolia are mostly of Khalkh ethnic group. Moreover, the region is the main land of Mongolian Buddhism, there are endless opportunities of visiting ancient Buddhist temples, nomadic cultural sights and pristine natural wonders here in the verdant Khangai Mountains and around.

Karakorum introduction: A potent echo of the lost Mongol Empire, Karakorum was chosen as Genghis Khan's new capital in 1220, serving in this role for only four decades before Hubilai Khan moved the centre of state to his seat in Beijing. The city flowered again during Mongolia's 16th century Buddhist renaissance with the construction of Erdene Zuu monastery, an expansive monastery complex. 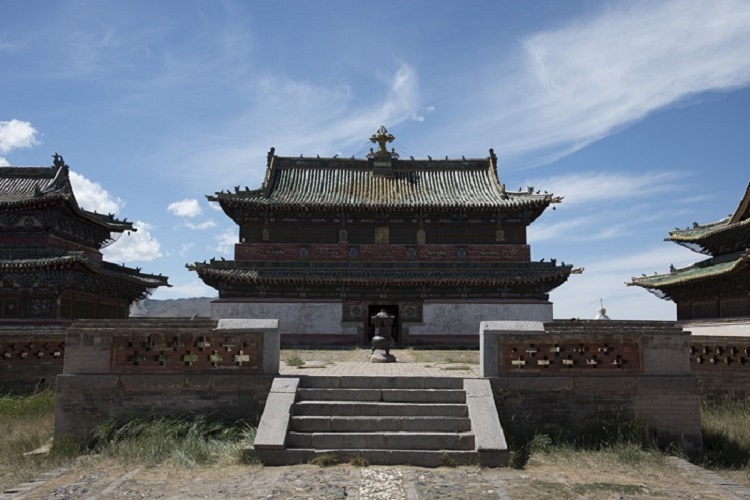 In these post-empire and post-communism years, what remains of the monastery, and the older remnants of Karakorum, are in some ways a summation of all Mongolian history. Today Erdenezuu monastery still shows its glory with collections of many priceless religious objects and incredibly beautiful Mongolian arts. It has a massive square wall, 420 meters in length each side, 108 Stupas & 17 temples.

Khogno Khan Natural reserve: It is a red rocky mountain which is 1969m long and 46.500 hectare natural reserve and located in area between Ulaanbaatar and Kharkhorin. It is a perfect place for walking and horse riding and there is many varieties rare animals.

The ruins of Uvgun monastery are hidden in one of its numerous valleys in the southern slope. The monastery was destroyed by by the armies of Zungar Galdan Bochigtu, a rival of Zanabazar in 1640. The current monastery was reopened in 1992 and includes a number of interesting, beautifully decorated temples in this tranquil setting which look out across the plains. 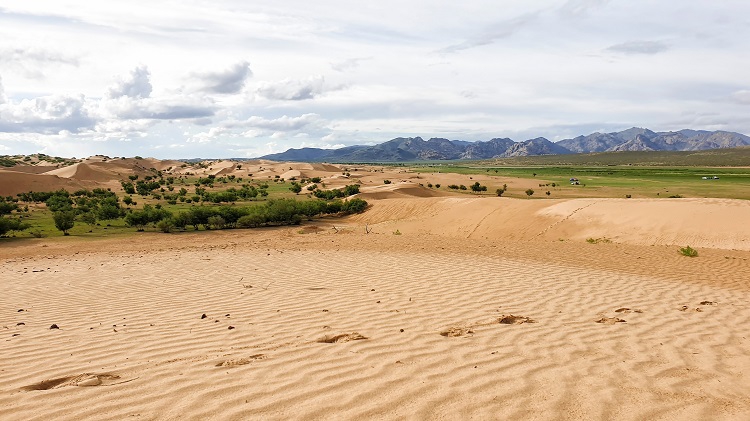 UVGUN KHIID monastery located in the mountains of (HUGNU-KHAN was built by the medieval religious figure Zanabazar who dedicated the mon astery to his teacher, The temple was one of his beloved ing its peak, the monastery served up to 1,000 lamas. In the 18th century Ovgon-Khiid became a bone of contention between Galdan Boshigt (Western Mongolia) and Zanabazar (Central Mongolia). The former was against Zanabazar’s intention to submit to the Manchus.

Khoshoo Tsaidam monuments is a Turkic inscribed monument of the Turkic State. The inscription was written by the grandson of Kulitegin and devoted to the Bilge Khan of Turkic state and his old brother Kulitegin in 732. It is noteworthy that the ‘Orkhon inscription’ has both a historical and scientific significance. The worship complex for the memorial to KuI-tegin, a famous political figure of the East-Tureg monarchy, is located about 60 km-s to the north of Erdenezuu to the west of Khogshin Orkhon river in the Tsaidam valley, Khashaat sum, Arkhangai aimag.

KHAR BALGAS or the Black ruins is the ancient capital of Uigur Khanate founded in 751 AD that ruled Mongolia from 745-854. The ruined citadel located on the banks of Orkhon river has very little left to see except for the outer walls, a stupa, and the ruler’s kagan (castle).

Ogii Lake: Ogii Nuur is a lake, 1.387 meters above sea level and located in Ogii Nuur Soum of Arkhangai province. It engages 27 square km of area, and has pure water. The lake abounds in various types of fish and birds, which creates a incredible natural beauty.It also provides a favorable condition for research work and traveling. For that Ogii lake attracts travelers, fishermen and nature researchers from Mongolia as well as from foreign countries. You can visit there on a day trip from Kharkhorin. This lake is truly wonderful place for bird life. More than 150 types of rare birds dwell in Lake Ogii. That's why it is the place of special interest for researchers and naturalists. Considering this situation we have started work of building a special tower from where to watch those birds and take photographs.Average depth is 6.64m, in some sections 15.3m, coastal length is 23.5m. Around the lake so convenient to have bath adventure, hiking, swimming and  horse riding.

Orkhon river has many kind of fishes and the main attraction is Orkhon Waterfall, it also called Ulaan Tsutgalan. The waterfall was formed by a unique combination of volcanic eruptions and earthquakes about 20,000 years ago. The fall is naturally most impressive after heavy rain.

The Orkhon waterfalls water flows for remarkable 1,120 km to the North and lies in the historically significant Orkhon Valley, UNESCO World Heritage site. The waterfall formed by combination of volcanic eruption and earthquakes some 20,000 years ago cascades down from a height of 27 meters. The waterfall is a good spot for bird watching and fishing. 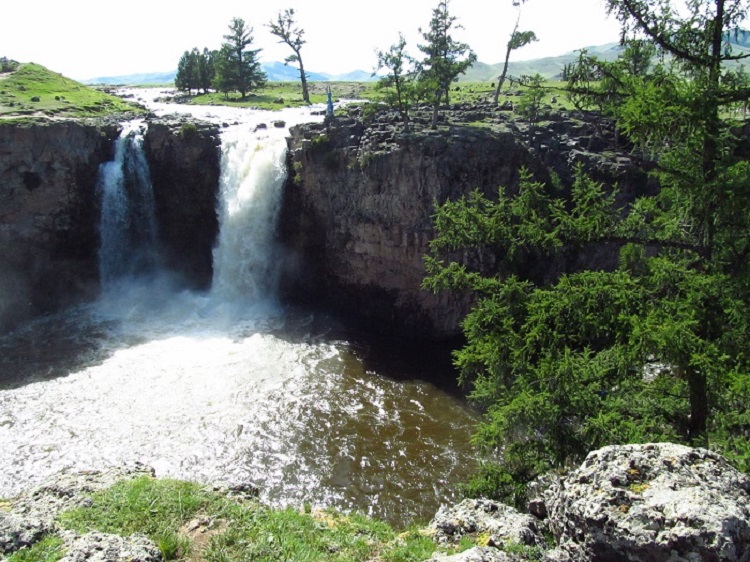 Naiman Nuur or the Eight Lakes is another area worth visiting located 70 km south-west of the Orkhon waterfall. The lakes were created by volcanic eruptions and are a part of the 11,500 ha of Khuisiin Naiman Nuur Natural Reserve.

Tuvkhun monastery is located on the top oh the Tuvkhun Shireet mountain which is about 20 kilometres from Bat-Ulziit soum of Ovorkhangai province. In 1648, the first Bogd Zanabazar was attracted by this strange natural shape when he was only 10 years old and in 1651 a stone walled little house was built for the purpose of meditation. From 1688, during the Galdan Boshigot war, the house was no longer used and people forgot about this place. 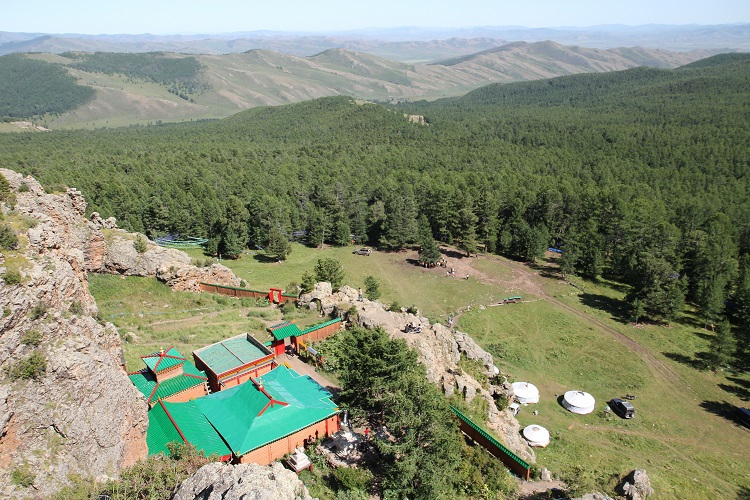 However in 1773, some people made it into a monastery. From that time it became known as the Tuvkhun monastery. On the back of this temple there is cave called the “Mother’s cave”, like a cave where someone is giving birth and hermits have stayed in the other 2 caves.On the right hand side of the worship house there were Ochirdari and Gombogur god temples, creation temple, eternal light temple, 2 stupas and a chapel that has a little outhouse. On the left hand side of the worship house were the monastery’s storehouse, kitchen and 2 or 3 gers for believers and 60 meter deep water well.

All the buildings were originally made by wood. You can still see the great Mongolian craftsmen abilities from the remaining wooden dovetails and prefabricated houses. In 1654 the first temple, which is the Creation temple, was built and it was restored in 1760 and 1786.

This fantastic Mongolia tour takes you on the path of Great Mongol Empire to the historic sites of 1...