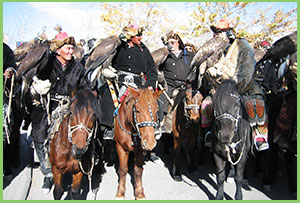 Kazakhs are renowned for their unique and extraordinary skill in using Golden Eagles to hunt small prey. Unfortunately, like traditional practices elsewhere in the world, hunting with eagles is on the verge of extinction. The Golden Eagle Festival in order to help revive this remarkable tradition and promote it among the younger generations in an effort to balance the preservation of Mongolia’s past traditions with conservation of nature and the modern demands of a growing population in 2002.

There is no English word for the hunting with eagles such as 'eagler'. Today professional Kazakh hunters in Mongolia call the hunting with eagle berkutchy. Aberkutchy is a life's profession, and in Mongolia is often an hereditary one. The relationship of the bird and its master is constant, and all-consuming. In the training of a young eagle, the berkutchy must sacrifice his sleep for a long period. For weeks, the growing bird is rendered sightless under its hood until its dependence on its master become complete. Such intimacy must turn into a lifelong trust with the eagle - twenty years or more. And it is said that as the man trains the eagle, so does the eagle trains his man. Female eagles are preferred since they are believed to be more aggressive and weigh as much as fifteen pounds (nearly one-third more than the males). 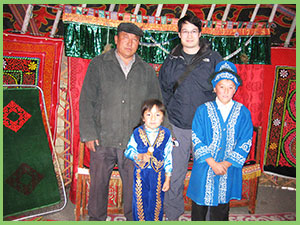 camel racing. In the afternoon you will enjoy eagle training contest- eagle hunters leave their eagles at the top of the mountain and call their eagle by a holding a prey on the horse.
Second day of the festival: On the second day of the festival you will see some of the great techniques of eagle training. Eagle hunters leave their eagle on the top of the mountain call their eagle. In doing so eagle hunters tow a prey from his horse with the long rope. This is good training for eagles to catch an moving object. Also you will see Kazakh traditional horse contests. 2 horsemen comes to the square with their horses and try to take animal skin away from each other. The one who takes the skin, wins the game. The other contest is about to catch an object on the ground while galloping on the horse.