Mongolia is well known as home to some extreme weather. The summers can be hot and the winters are bone chillingly cold. They have four pretty different seasons, but one thing that is consistent are sunny skies. Mongolia is known as the “Land of the Eternal Blue Sky”.  The country boasts over 260 sunny days each year.

The winter is long and cold with temperatures often well below -30° Centigrade. Despite these temperatures, the sun in the blue winter sky often makes it feel warmer. There is very little snowfall but snow and ice can remain for several weeks at a time.

The rainy season is from July to September. The rain showers are brief, but the clouds are beautiful over the massive open spaces. Mongolia’s summer is the most pleasant time to travel in Mongolia.

Temperatures can reach +40 Centigrade, but are always comfortable. The air is dry and travel is pleasant. The Gobi usually has the hottest temperatures. Summer evenings can be cool because of Mongolia's high altitude, so be sure to pack a sweater. The spring is a time of strong winds, especially difficult in the sandy areas of the Gobi. The autumn is a lovely time to visit as well, with the many larch trees in the country becoming a brilliant yellow before losing their needles. 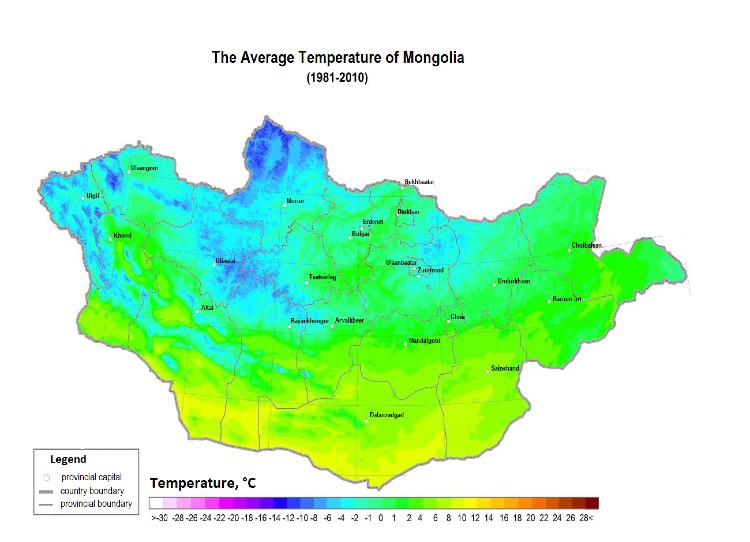 The hottest month of the year in Mongolia is July, the average temperature in the Altai, Khangai, Khuvsgul and Khentii mountain region is +15° C, it is from +15° C to +20° C in the great lake depression. The Altai, Khangai, Huvsgul, and Khentii mountain ranges go from +20° C to 25° C in the summer. In the southern part of Dornod steppe and the Dornogobi region it is more than +25° C. In the summer time, the temperature goes down when land level goes up +0.5 – 0.6° C for each 100 meter than sea level.

The annual precipitation in Mongolia

Generally, there isn’t much precipitation in Mongolia. The average rainfall is 300 – 400 mm in the Khangai, Khentii mountains. In Khuvsgul’s mountainous area they get around 250 – 300 mm of rain and snow in a year. The Gobi only gets 50 – 100 mm per year. Around 85% of total precipitation happens from April to Sep and around half of the total is in July and August.

The mountains get slightly more rain. The average of rainy days in the mountainous regions of Mongolia is 60 – 70 days. The Khangai and Khentii mountain ranges get the most rain. For a comparison, in Dornod and the steppe areas, they only get 30 rainy days.

Mongolia mostly gets rain, not snow. Throughout the whole winter, there is typically around 10 mm snow in the Gobi Desert. The mountains and Uvs Lake get around 20 to 30 mm snow each year. The rest of the country only averages around 10 to 20 mm snow in rest of territory.

Because of the cold temperatures though, snow stays when it does occur. The number of days where snow covers the ground is also longest in the mountains. The Mongol Altai, Khangai, Khentii and Khuvsgul regions have more than 150 days of snow on the ground. The forest and steppe have 100 – 150 days of snow cover. Even the Gobi holds onto snow for 50 days out of the year.

It is very windy in the steppe and Gobi Desert. The average wind speed is 4 – 6 m/s in these territories, 1 – 2 m/s in the Khentii mountain range and 2 – 3 m/s in rest of region. Make sure to always bring a jacket, though in the summer you will probably appreciate the winds in the Gobi. 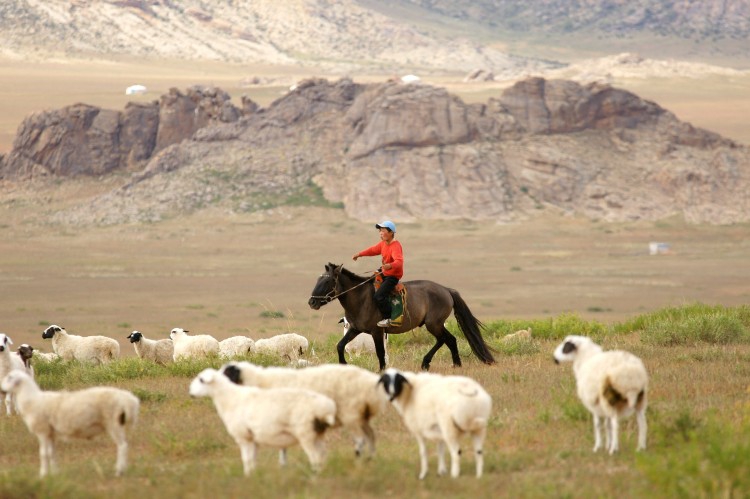 Spring comes after the severe winter and days become longer while are nights shorter. It is the time when snow melts and animals come out from hibernation. All animals and livestock breed while the soil thaws in the warm spring weather. In Mongolian "Khansh neekh" means some animals, which hibernated, awoke from their sleep.

For people and livestock, it can be a harsh season of the driest and windiest days. Though the temperature quickly gets warmer gets warm again in spring, livestock breed and gain their weight back. In the end, Spring is a prosperous season - everybody is calm and relaxed. The grass turns green, anemones grow up and nature is covered with its green dress. Beginning in March, the Spring usually lasts about 60 days although it can be as long as 70 days or as short as 45 days in some areas of the country. 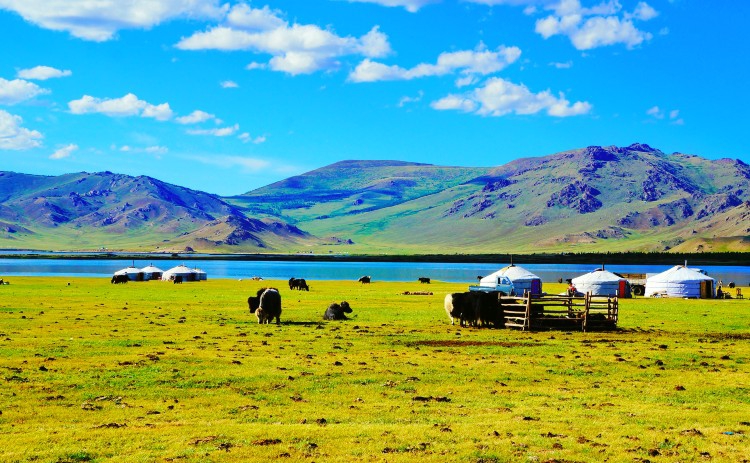 Summer is the warmest season in Mongolia. Generally, precipitation is higher in summer than any time of the year. Rivers and streams are at their fullest in summer. It is the time when pasture, grass, and crops grow and livestock bulks up.

It is the most pleasant time with abundant dairy products and there are many feasts and holidays of happy people. In Mongolia, summer lasts about 110 days from the end of May until September. July is the warmest month of summer and it is typically 15°C and 20°C in the mountains. The steppes range between  20°C and 25°C, but temperatures as as 32°C have been recorded. The Gobi is typically the warmest, with temperatures ranging from 40°C to 41°C in summer. Sometimes it reaches as high as 50°C. No wonder they have camels down there! 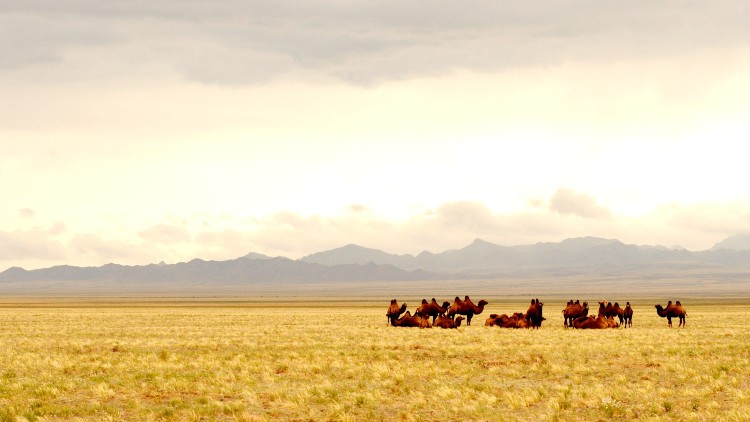 Autumn in Mongolia is a season of transition. The climate changes from the hot and wet, to the cold and dry winter. Autumn has less rainfall than the summer, and it gradually cools down. Vegetables and grains are harvested at this time. Pasture and even the forests become yellow. The native larches change from a bright green to yellow before shedding their needles. Fat livestock’s hair get longer and more woolly in preparation for the winter.

Autumn is an important season in Mongolia to prepare for winter. In the countryside, people are busy harvesting the crops, vegetables and fodder. They prepare their cattle barns and sheds to protect their herds. They also stockpile firewood for warming up their homes. Autumn lasts about 60 days from the beginning of September until the early November. In some years, there are many long and sunny days in autumn, which are increasing with global warming. 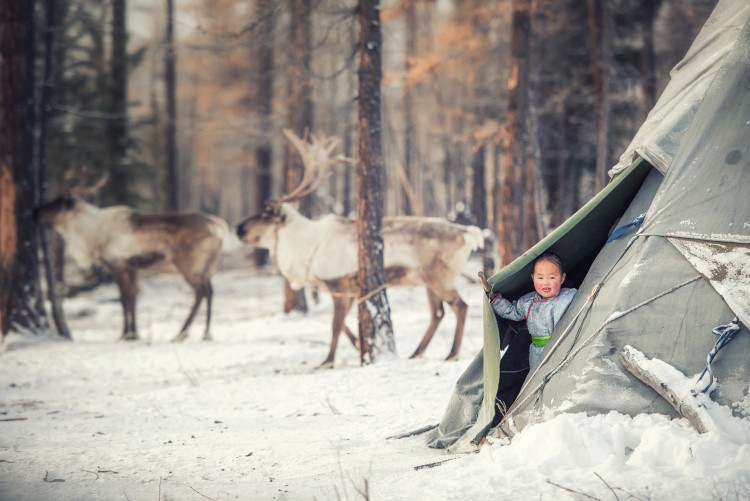 Winter in Mongolia is the most severe, coldest, and longest season. All rivers, lakes, streams and ponds freeze in winter. It snows throughout the country, but only lightly. After making all the necessary preparations for a long winter, herdsmen stay at their winter camps. People prepare milk tea and carefully ration out supplies to last for the season.

Winter starts early in November and lasts about 110 days until March. Sometimes it snows in September and November, but the heaviest snowfalls usually occur at the beginning of November. January is the coldest winter month in Mongolia. The average temperature is -35°C in Khangai’s mountainous regions. The rest of the country ranges from -20°C to -25°C. Even the Gobi is a chilly -15°C. When properly dressed though, you can easily enjoy spending time outdoors. The lack of tourists means you’ll have this beautiful country to yourself. And since Mongolians have been dealing with the winters for centuries they have more than a few remedies to help warm you up!