Chinese cuisine has a long history, and is one of the Chinese cultural treasures. It is famous all over the world. Chinese cookery has developed and matured over the centuries, forming a rich cultural content It is characterized by fine selection of ingredients, precise processing, particular care to the amount of fire, and substantial nourishment. Local flavors and snacks, and special dishes have formed according to regions, local products, climate, historical factors, and eating habits.

The staple food in China is usually rice and wheat. The local flavors and superb cooking form the present famous Chinese Eight Cuisines from the eight provinces of Shandong, Sichuan, Guangdong, Jiangsu, Zhejiang, Fujian, Hunan and Anhui, each of which has its own characteristics. Including the typical Beijing Cuisine and Shanghai Cuisine, which are also popular in China.You can enjoy the delicious Chinese food not only in superior restaurants with many facilities and quality service, but also in ordinary eateries that are much cheaper but still serve delicious food. Prices vary, based on the different conditions and the environment. Anyway, wherever you go for a meal, health, sanitation and safety are necessities that you should pay much attention to.

Food in remote areas or cities, like Lhasa, is not as fine as that in large cities. Besides, there are not so many choices and you may not be used to the local taste, especially in the regions of many minority features and special eating habits. Western-style food can also be found easily in China’s big cities. In addition, some fast-food outlets, like McDonald's, KFC and Pizza Hut, are also popular in China.

China can be divided into many geographical areas, and each area has a distinct style of cooking. The ingredients used in the food are based on the natural agricultural products of the region. In Northern China, for example, wheat is eaten more than rice as a staple food. Food using wheat as its main ingredient, such as noodles and dumplings is prevalent there. China's Southern cuisine uses far more rice, with such staples as rice noodles and zongzi - sticky rice wrapped in leaves. Southern food, is typically more spicy, and many minorities eat chilies every day. We have selected China's Top Food Cities to cover a range of China's foods and destinations that are most popular with foreign travelers. 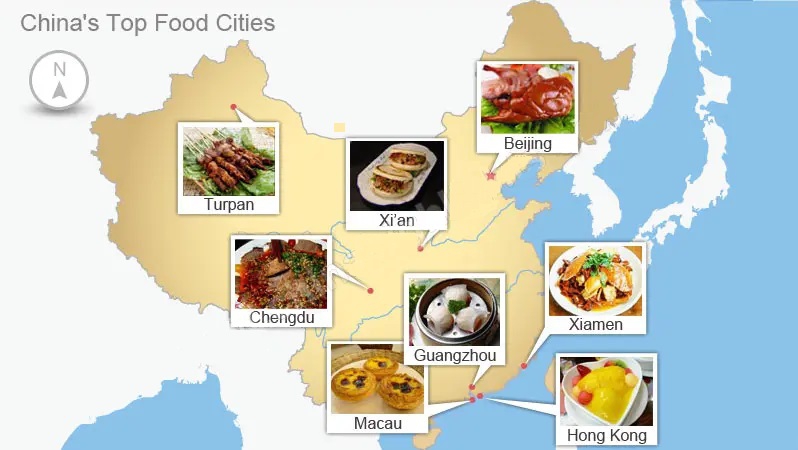 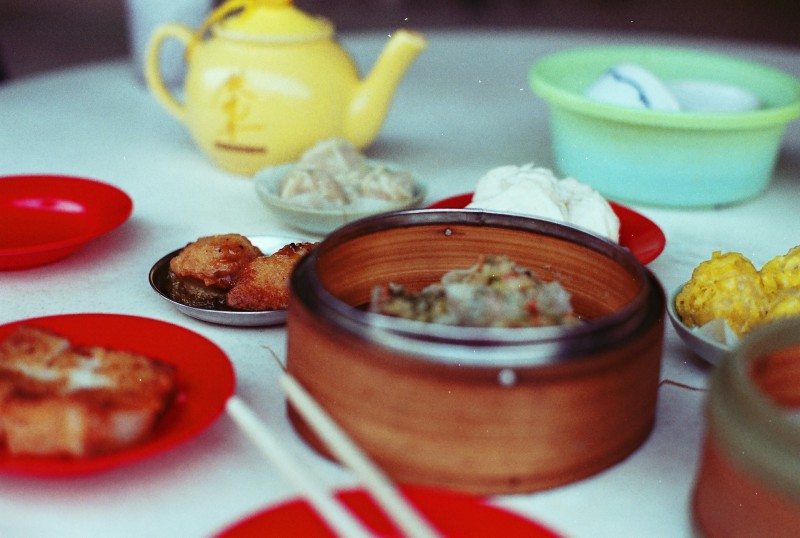 - Location: Southeast China
- Culinary Style: Cantonese cuisine, Hong Kong Cuisine, Foreign cuisine
Cantonese food is enjoyed the world over and is closest to the flavor of Chinese takeaway food. It is the sweetest of China’s Eight CulinaryStyles, and is the most similar to the Western palate. Hong Kong offers this style, along with good seafood, and dim sum (tea and a light meal, peculiar to HK).
Hong Kong, being a wealthy international city, has restaurants selling high-quality food from many countries of the world, most notably Japanese, Korean, and British food.

- Location: Northeast China
- Culinary Style: Jing cuisine, Northeast cuisine, Mongolian cuisine
Peking duck or simply roast duck is a delicious classic among Chinese foods. It is prepared no better anywhere than in Beijing, where it originated as an imperial food. Quanjude Restaurant serves the duck feast in lavish and studied style. Beijing food is in a class of its own, called Jing cuisine. In the north of China wheat is the staple, more than rice, so many wheaten foods are eaten, like pancakes, noodles, steamed buns, and dumplings. There is also lots of braising in the Northeast style.
Mongolian hotpot is another classic that should be eaten in Beijing, which is surprisingly only about 250 kilometers (160 miles) from Inner Mongolia, or 500 kilometers (300 miles) from Hohhot. 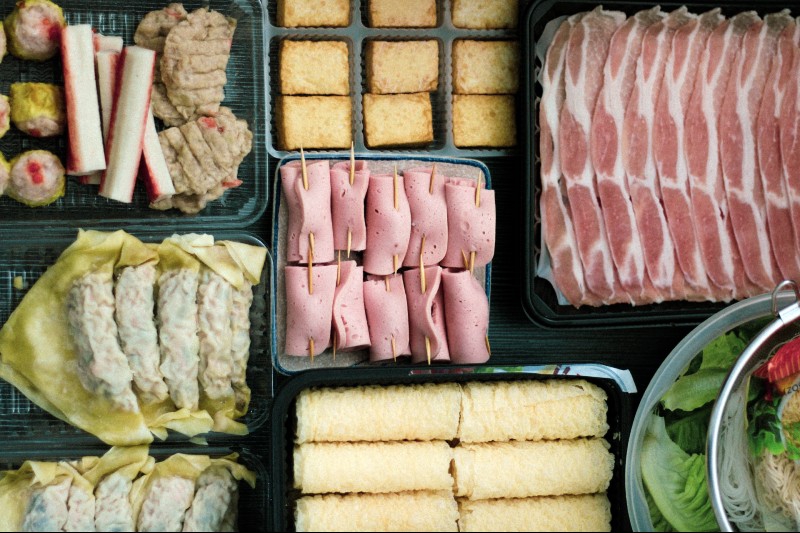 - Culinary Style: Chuan cuisine
Chengdu is the capital of Sichuan Province, which gives its name to the spiciest, and also a very popular, Chinese culinary style. China’s Sichuan food should be braved. It is too hot for most in all but small quantities, but if you love chilies this is heaven. Classic dishes that should be eaten here are the Sichuan hotpot, kungpao chicken and mapo tofu. Chongqing is also a great city to eat Chuan food.

- Culinary Style: Muslim cuisine, Xinjiang Cuisine
Anywhere in the Muslim Northwest of China would be a great place to eat whole roast lamb and hand-pulled noodles, as this is where these dishes originate. Also do not miss the Xinjiang ‘large flatbreads’, known locally as nang (/nung/). Turpan pips Urumqi for food, the capital of the Xinjiang, because it also has excellent locally grown dried fruit in its almost rural setting. Its small town restaurants and shops provide a more peaceful and authentic atmosphere than the biggest city in Central Asia. 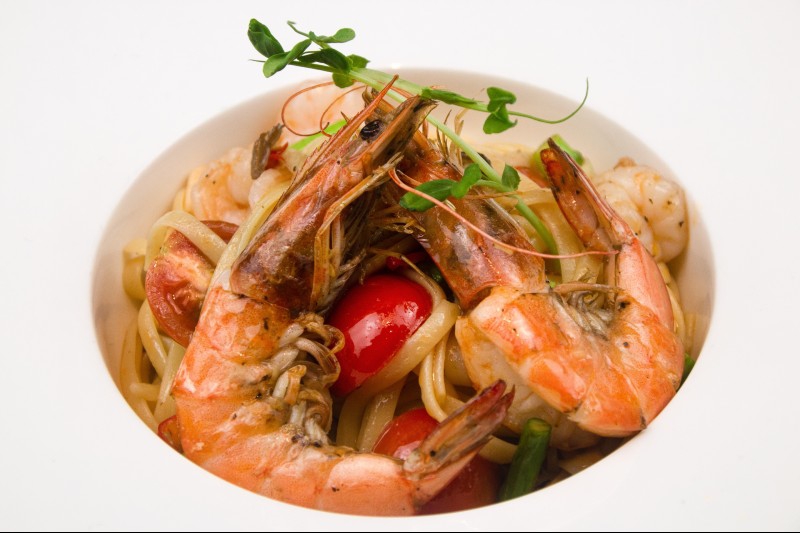 - Culinary Style: Min (Fujian) cuisine
For great seafood and authentic sweet and sour dishes go to Xiamen.Fujian cuisine, developed in Fujian Province on the Pacific, is known for its spices and soups. Xiamen’s attractions make it the most interesting city in Fujian. 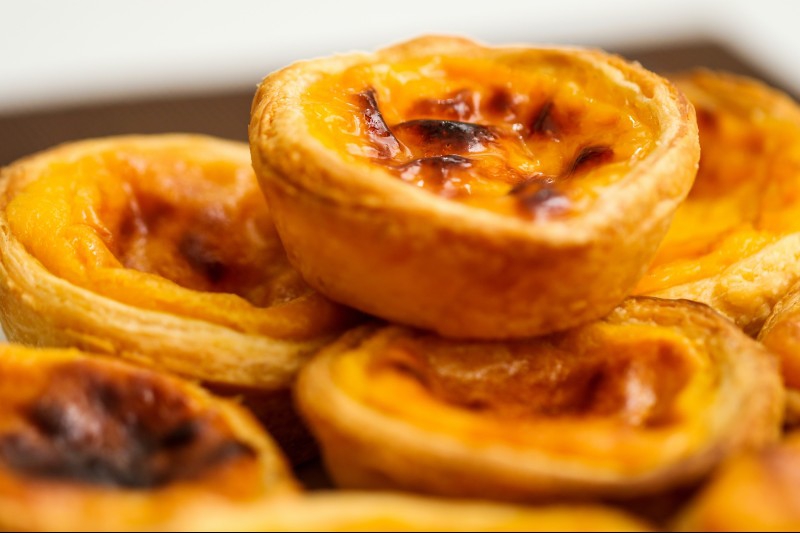 - Location: Southeast China, by Guangdong Province and Hong Kong,
on the Pacific coast
- Culinary Style: Portuguese-meets-Chinese, Cantonese cuisine
For an interesting mix of Portuguese and Chinese style food journey to Macau. This small former colony has a menu different enough and tasty enough to merit a place on the list.  It is in the Cantonese food zone.

- Culinary Style: Northwest cuisine, Muslim cuisine, imperial feasts
Xi’an should be on the list for its imperial feasts, including many exotic meat platters, like camel and donkey that can be eaten while viewing a Tang Dynasty show. Xi’an is a representative place for the Northwest food style, which is actually quite similar to the Northeast style, represented by Beijing above, but more noodles, with less buns and dumplings. Lanzhou is famous for its pulled noodles.
Some suggestions:
1. Do not skip meals. Sightseeing takes energy.
2. Do not overindulge at meal times. You can sample new foods and the seemingly endless array of courses
without eating large portions. You will feel better if you eat small portions throughout the day.
3. If you get tired of Chinese food at a certain point, note that rice will be available at every meal.
4. Eat fruits and vegetables whenever possible. This can help you avoid constipation. Breakfast everyday will
provide you with an ample choice of fruits and juices.
5. Drink plenty of fluids. Mild dehydration, resulting from excessive perspiration, can make you more
susceptible to fatigue, even illness.
6. Keep a bottle of drinking water with you and try to drink even when you are not thirsty. On sightseeing trips, bottled water can be purchased everywhere for about 25 cents
per bottle. Alternatives to waterinclude fruit juices and soft drinks. Remember that alcoholic beverages will cause further dehydration.
Special Diets in China:
Airlines can accommodate you with vegetarian meals. In Chinese restaurants, if you are with a group, meals tend to be served family style. There will be a variety of dishes, and there will always be vegetable-only dishes. If you have any questions about the meals, you can ask your local guide for help.