Today the same as many centuries ago Lake Baikal remains a crossroads of cultures where native Soyots still herd reindeer in the north of Irkutsk region and Buryat people maintain many of their old traditions. The wilds of Siberia also offer a gateway to Mongolia and its ancient and amazing culture. It is hard to imagine that these wilderness areas and exotic cultures are only a five hour jet ride from Moscow or Khabarovsk.

The Buryats numbering approximately 350,000 are the largest ethnic minority group in Siberia and are mainly concentrated in their homeland the Buryat Republic and the Buryat autonomous district on the territory of Irkutsk region. Buryats are of Mongolian descent and share many customs with their Mongolian cousins including nomadic herding and setting up yurts (or gers in Mongolian) for shelter.

Today, the majority of Buryats live in and around Ulan-Ude which is the capital of the republic although many live more traditionally in the countryside. The Buryats still preserve their shamanism religion and many practice Buddhism. 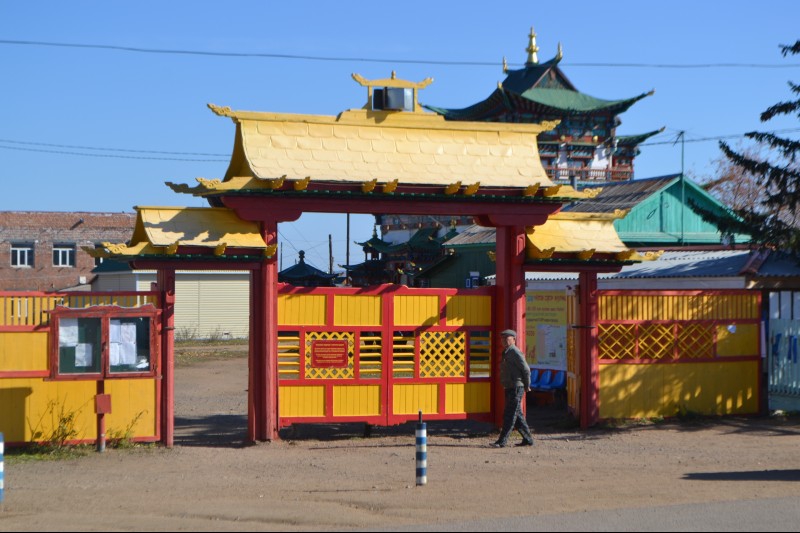 Close to Ulan-Ude there is Ivolginsky Datsan - the Buddhist Temple located in a picturesque and peaceful place named Ivolga only 23 km (14 mi) from Ulan-Ude. Ivolginsky Datsan was the only Buddhist monastery tolerated by the Communists. It has more than 1,000 Buddha statues from small ones to the one that is 2 meters (6.5 ft) high. The building is a gleaming three-story temple crowned with yellow eaves and guarded by stone tigers, caretaker of the heart of Buddhism in Russia. The Ivolginsky Datsan is considered to be the center of Buddhism in Russia. 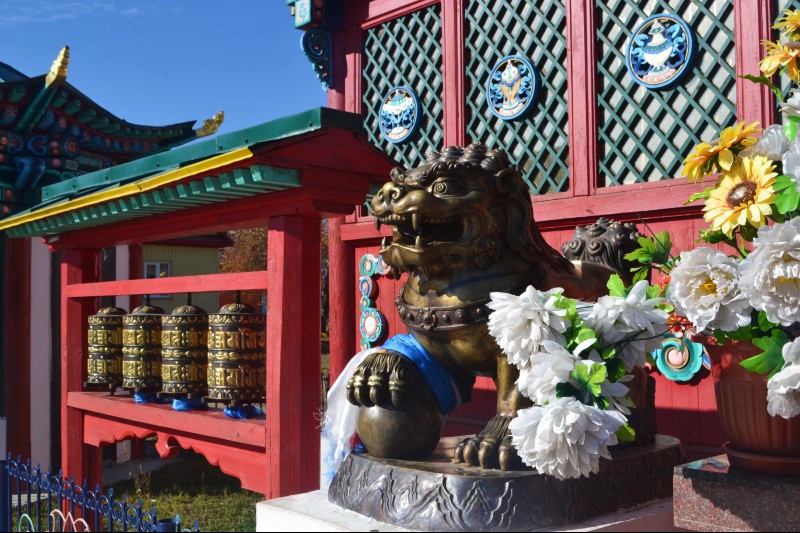 On 11th September 2002 the body of Khambo-Lama Itigilov who passed away while meditating in a pose of the Lotus 75 years ago here after having been raised from the burial site by local Buddhist monks was found in a fine condition and same stiffen pose of the Lotus. Now the Lamaistic Datsna monks plan to construct special glass sarcophagus in which the body of Holy Khambo-Lama will be kept.

In the end of the Russian Patriotic War of 1812 with France the prime of the Russian youth, most of who were rewarded leaders and commanders of the war field, passed through the prosperous European countries all the way to Paris as winners. They saw that many soldiers who actually won the war and defeated the Napoleon’s army had to return back to their masters. The young patriots decided that they should help their country to overcome this drawback. So, immediately after the war several secret societies were founded.
The so-called northern society was founded in St. Petersburg under the leadership of prince Trubetskoy. It advocated the idea of the constitutional monarchy for Russia. Mr. Pestel, the leader of the southern society that was situated in Moscow, saw the future of Russia as a republic. Members of these societies were mostly noblemen, men of letters, offices, well-off young people full of progressive patriotic ideas.
In December 1825 the revolt was to take place in St. Petersburg on the Senate Square. Over 3,000 people were going to participate in it. They were about to seize the opportunity emerged due to a 3 week interregnum between the death of Alexander I and accession of Nicholas I. The rebellion was poorly organized and failed. Its five leaders were sentenced to death by hanging which was a great shame for a man of a noble family.

Other rebels were sent to Siberia for permanent settlement. Wives of some of the political criminals followed their husbands to banishment that was really an act of great courage as they had to tear themselves away from their relatives, friends and even children for the sake of being with husbands. They were allowed to go to Siberia on condition that they would refuse all their property and money and that the children born in exile would be proclaimed illegitimate.
They lived in this severe cold country for more than 30 years giving support to their husbands. Whatever difficulties they might face living in Siberia the Decembrists organized their social life, built houses and gave birth to children. After the amnesty of 1856 declared at the time of Alexander II accession only 42 of them returned back home to European Russia. Moreover they were still banned to live in 2 capital cities of Russia St. Petersburg and Moscow.
By the XIX-th century Irkutsk became a major cultural and educational centre mainly because of the large number of intellectuals exiled to this part of Siberia after Decembrist revolt who founded first hospitals, schools and libraries of Irkutsk. 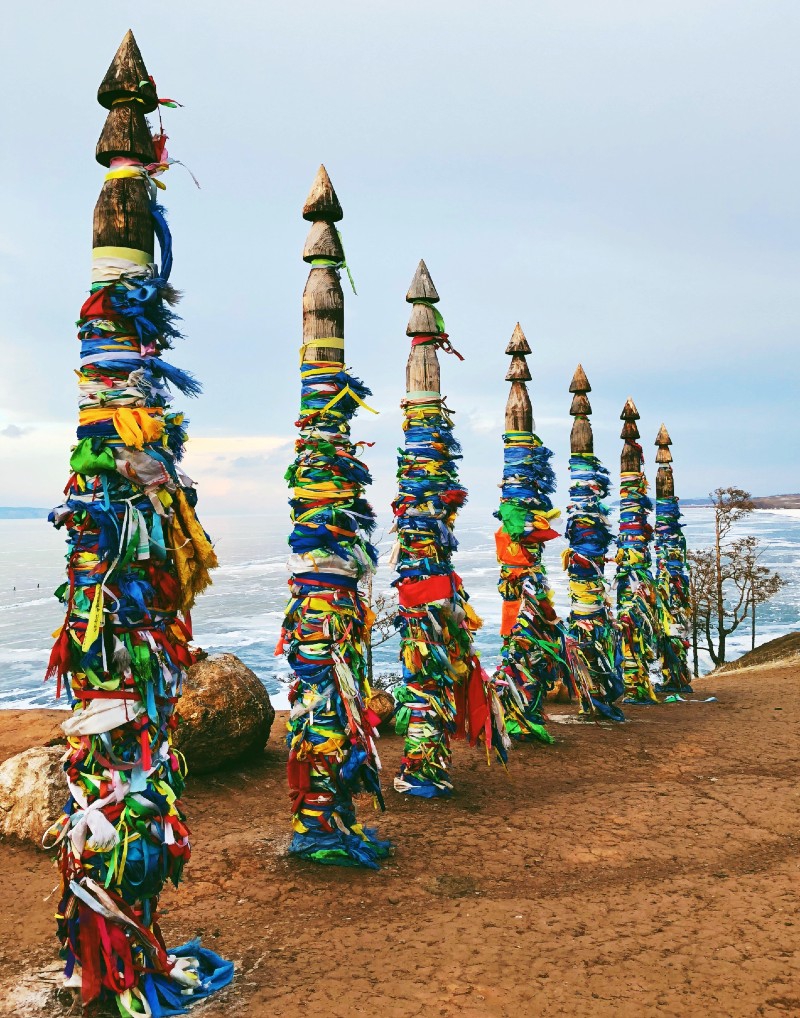 Shamanism is one of the most ancient religions that appeared 30 thousand years ago and thus related to pagan believes. It’s mainly based on nature worshiping. Those familiar with American Indians’ believe may see likeness between these two religions.
Shamanism believers (Buryats) think that spirits of nature, good and bad, live in trees, mountains, hills. Instead of one supreme God the world is governed by 99 spirits and only a powerful man can serve a mediator between them and mere mortals. This person is usually spiritually strong and has a unique ability to communicate with spirits. Shamans are very respected people in the Buriat culture, since only peculiar man can fall into a trance, conduct holy rituals and even levitate. Shamans really helped common people in everyday life: they healed babies, triggered rain, gave people advice in hard times. Olkhon Island, the biggest island of Lake Baikal, is still considered the center of shamanism. Every two years from different places shamans come to this sacred place to share knowledge and experience.

The Old Believers of Siberia:

The Old Believers or “semeiskie” as they are called in Siberia make up a unique regional ethnographic group. They were founded more than 300 years ago by a group of religious dissenters unwilling to accept the liturgical reforms of the seventeenth century Russian Orthodox Church. In 1650 Old Believers broke away from the Russian Orthodox Church and then were cruelly persecuted for their actions by the church.
Eventually, the Old Believers divided into sects, some sects fleeing to the borderlands, others exiled to Siberia and many resided in the remote wilds of Transbaikalia which is now the Buryat Republic. Scattered across the region they lived in isolation and preserved their beliefs including their sacred two finger cross sign.
Music is particularly important to Old Believer culture. The Great Russian composer Rimsky-Korsakov notes that their songs are an example of “ancient pure Russian melody”. Even today in Buryatia Semeiskie villages have gifted singers who follow the traditional singing styles and transfer this gift of music to their sons and daughters.