Natural Zone of Mongolia: Mongolia is one of the few countries, which possesses a great range of natural ecosystems within their borders. Mongolia is located at the junction of Siberian taiga, Central Asian prairie, steppe, and deserts. This junction offers distinct species of fauna and flora throughout the territory. Largely unknown to the rest of the world until recent years, Mongolia's unique combination of diverse landscapes, unspoiled habitat, rare wild plant and animal species, clear water and fresh air has started to attract international nature conservation organizations and has become the subject of growing international attention. The six basic natural zones of Mongolia differ in climate, landscape, soil, flora and fauna.

1. High Mountains- Including the Altai Mountains and Tavan Bogda

Mongolia is a mountainous country. Though the high mountain zone, which includes the higher elevations of these ranges, makes up only about 5 percent territory of Mongolia, average elevation 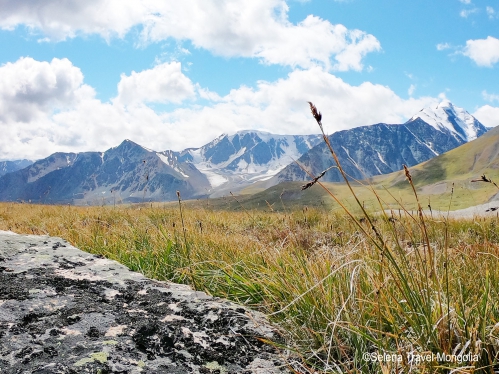 of the country is quite high, at 5,184 feet (1,580 m.) above sea level. In the Far Western Altai, Khuiten Peak in the top parts of Tavan Bogda Mountains reaches 14,350 feet (4,374 m.), the highest point in the country. Altai, Khangai and Khentii mountain ranges and the Khuvsgul Mountains are higher than the height of forest zone. Many mountain areas of Mongolia show signs of previous Ice Ages, with U-shaped valleys and boulders left behind by retreating glaciers. The climate in the high mountain zone is extremely cold, and there is a short growing season. Located above tree line, the zone is characterized by tundra, alpine-sedge meadows, highland swamps, and lichen-covered boulder fields. 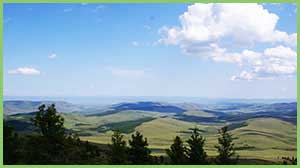 Taiga zone which covers 5 percent of Mongolian territory occurs only in Northern Mongolia, where it is found in the Khentii Mountains, in the mountainous terrain around Lake Khuvsgul, part of Tarvagatai mountain range, higher areas surrounding Orkhon river valley and some parts of the Khan Khukhii mountain range. The taiga zone experiences more precipitation (12 to 16 inches annually) and lower temperatures than most of Mongolia, therefore plant growing period is comparatively short.

Steppe covers nearly the entire far-Eastern region of Mongolia, extending west in a narrowing band just south of the Khangai and Khan Khukhii Mountains all the way to the Depression of the Great Lakes. Mongolia's steppe is part of a vast plain that begins in Eastern Europe and reaches to the steppes of Manchuria. This steppe zone includes a distinctive group of flora and fauna. In the central and western areas of the country, the steppe provides many of the nation's most important grazing lands for domestic livestock. The steppe is vulnerable to impacts from overgrazing, agriculture, roads and other human activities.

Desert steppe occupies a large band, more than 20 percent of Mongolia's total area, extending across the country between the steppe and desert zones. This zone includes the Depression of the Great Lakes, the Valley of the Lakes, and most of the area between the Khangai and Altai mountain ranges, as well as the eastern Gobi area. The zone includes many low-lying areas, soils with salt pans, and small ponds. The climate is arid with frequent droughts and annual precipitation of 4-5 inches (100-125 mm.). Frequent strong winds and dust storms strongly impact the area's vegetation. Still, many nomadic herders of Mongolia occupy this zone. 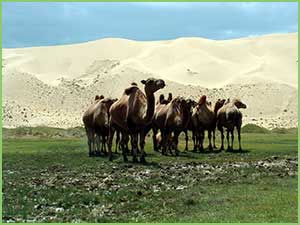 The Gobi is one of the great deserts in the world, occupying much of Southern Mongolia and northeastern China and composing the northern part of Central Asian deserts. Starkly beautiful, the expanses of the fabled Gobi are rugged and inhospitable. Vegetation is sparse here, and the zone displays a remarkable variety: from rocky mountain massifs to the flat pavement-like areas of the super-arid desert, from poplar-fringed oases to vast outwash plains and areas of sand dunes. These areas provide habitat for many threatened species of Mongolia, including the wild camel, Gobi bear, and wild ass. The climate there is extreme. Precipitation may fall only once every two to three years and averages less than 4 inches (100 mm.) annually. Temperatures climb as high as 104° F (40° С) in summer, and fall as low as 104° F (-40° С) in winter. During the spring and fall, dangerously strong winds buffet the area with dust storms and wind-speeds up to 140 km/ hour. 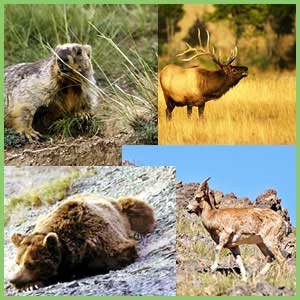 The scientific study of Mongolian fauna was started in the second half of the 19th century. Many traveling in Mongolia may find it difficult to distinguish between wild and domesticated animals as both roam freely on the open, vast steppe. Though Mongolia does not have the large games such lion or elephant that attract visitors to Africa, it has many rare and endangered species such as the snow leopard, Argali and Ibex.

Currently 136 species of mammals in 8 classes, 22 families, 70 types have been registered in Mongolia; most of them are endemic to Central Asia. Roughly 60 species of them are hunted as they are considered game animals. 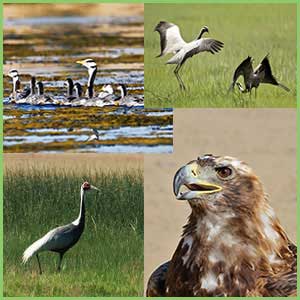 Mongolia has a rich composition of bird species due to the migratory routes from the Pacific and Indian Oceans to the Mediterranean Sea and to Arctic Ocean and Northern Tundra... 426 species of birds have been observed in Mongolia- 322 species or 78% are migrated. 30 species of birds are included in the "Red book of Mongolia" as they are concerned as rare and endangered. And some lakes as Khovsgul, Uvs, Khar Us, Dayan, Dorgon, Terkhiin Tsagaan and also some rivers where high density of birds is observed have been strictly protected partially. Birds such as Grus leucogeranus, Grus vipio, Chlamydotis undulata, ciconia migra, Pelecanus crispus, Platalea leucorodia, Anas formosa, Limnodromus semipalmatus, Larus relictus have been protected.

Insects in Mongolia: Insect life is the richest in the wild life of Mongolia as 13000 species of insects are observed in the country.

Mongolian vegetation presents special features which have developed through time in response to local landscape, environmental factors, and climate. Mongolia is a site of convergence with flora originating both in the Great Siberian Taiga and the central Asian steppe and desert.

Mongolia has acquired plant species from Manchuria in the east and from the Kazakhstan-Turan area in the west. The gradual transition from high mountain taiga, to mountain forest steppe, to flat grassy plains, and on to semi-desert and true desert, offers unique opportunity to see vegetation from different vegatation zones.  This is reflected in the change in precipitation and plant distribution, from foothills to the tops of mountain ranges in vertical belts. Mongolia has over 2,823 plant species, while central Siberia has 2,400 and Inner Mongolia has 2,176. 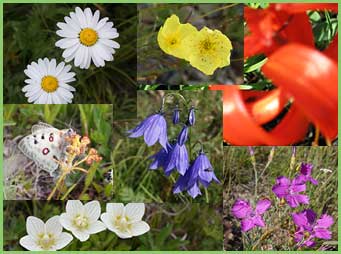 According to long term studies, Mongolia gets 230 mm of average annual precipitation . The most of it evaporates and only 10% stays on the surface, of which 37% waters the soil and 63% supplies the surface water-rivers and streams. 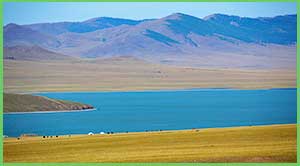 6898 springs are currently in use. Most of Mongolia's 3500 lakes are located in the western and northern parts of the country, some notable lakes are Uvs, Khovsgul, Khyargas, Khar, Boon Tsagaan, Orog, Achit and many more. 1194 lakes of Mongolia do not dry all the year around. Mongolia has comparatively high levels of surface and ground water resources. The rivers of Mongolia belong to the inland drainage basins of the Arctic Ocean, the Pacific Ocean and Central Asia.
The north has a larger network of rivers and streams than the south. The longest river is the Orkhon at 1124 kilometers in length. There are some 3000 rivers in total with a combined length over 67,000 kilometers. There are over 3000 big and small lakes, nearly 6,900 springs, 190 glaciers and 250 mineral water springs. The glaciers in Mongolia, cover 540 square km. The biggest glacier of the country Potanin is in the Altai Mountains and has a total area of 107.9 square km. 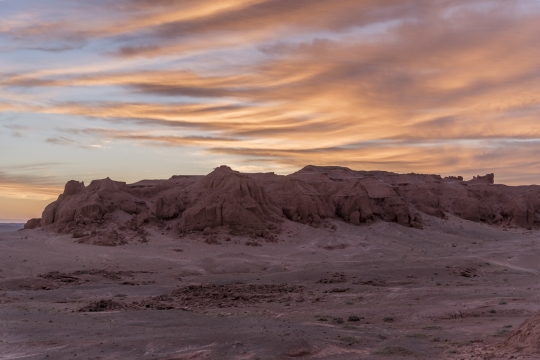 Mongolia is the second biggest country in the world where dinosaur remains, fossils and eggs has bee...

The Gobi of Dreams tour 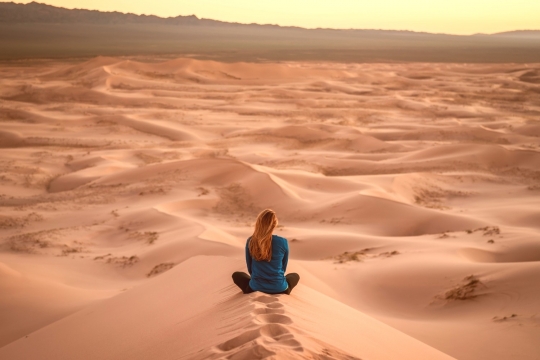 Gobi of Dream tour presents the highlights of the most beautiful southern part of Mongolia including...