Facts about Mongolian language, good luck with your tongue!

If you have ever heard people conversing in Mongolian, and thought that it’s unlike any other language you’ve ever heard- don’t worry, you’re not the only one. Mongolian language is an Altaic language which means that only Turkic and Tungusic languages are in one group with it. Some studies have added Japanese and Korean language in the group too, but most of the authors disagree on this one.

Out of around dozen different accents of the Mongolian, changing in different aimag (regions in Mongolia), Khalkh Mongolian is spoken by the majority of the population- around 2.35 million out of 3 million. However, the accent can get pretty tricky in different parts of the land, the difference is almost inevitable for the natives.

Mongolians use Cyrillic alphabet which consists of 35 letters. 7 of them are vowels, and 2 of them are signs and the rest are consonants. Mongolian alphabet and linguistic history can go back as far as 1200 years, varying in kinds including Mongolian script, rectangular script and even Latin letters, finally being decided in Cyrillic in only 1943. We have adapted Cyrillic letter due to the fact that Mongolia has been part of the Comintern- association of the communist countries during the WWII.

Science aside, Mongolia is simply a pretty hard language to learn. Maybe the fact that vowels are separated into masculine and feminine group that makes huge difference in not only the aspect of speaking but also in the grammar, or the fact that it is a language that’s spoken by pretty few people and hard to practice unless you live in Mongolia. The alphabet is bigger than most of the other countries and the stress in the parts of the word can make a huge difference in its meaning.

Why is Mongolian hard language for foreigners to learn?

As I’ve mentioned before, foreigners have found Mongolian language hard to learn because the learning sources are really rare unless you’re in Mongolia. Also the main basics of the grammar and the general accent are so different from most of the other languages.

Can Mongolians in China read the Mongolian language in the Cyrillic script?

Which language is easier for Mongolians, Chinese or Russian?

Even though this question is not about Mongolian language itself, it can give some great understanding about it. Mongolian and Chinese languages couldn’t be any more different. Mongolians learn Russian better than any other foreigner since the letters are the same, so does the pronunciation. Also, there are lots of grammar similarities including cases of the nouns and the structure of the sentences. Meanwhile, Mongolians have hard time learning Chinese since the pronunciation and scripts are so much different.

Now back to the basics. Even though mastering Mongolian might take several months, if not years- you can still say greetings to a Mongolian which is a sure way to win our heart. Mongolians think it’s adorable when a foreigner talks in their language since they appreciate their effort to know better about our culture.

So here are some of the most basic phrases in Mongolian. P.S. I’ll write it in Cyrillic letters so that you can have an idea how it looks like.

Those are some of the most commonly used phrases in Mongolia. Good luck learning them! (I apologise if the pronunciations are weird, it has been constructed upon popular opinion of the foreigners I’ve met and sacrificed their tongue to try to tell it and learn them for me.) 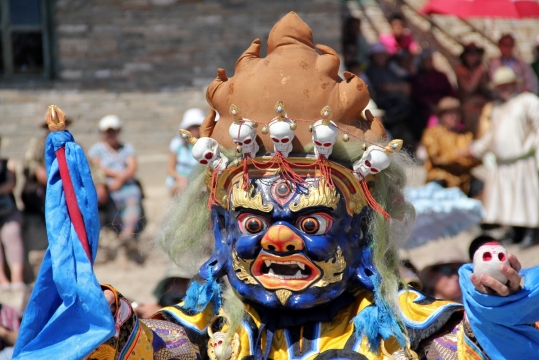 You will experience the highlights of Mongolian culture and natural wonders including the mysterious...