Before human beings came to Eurasia, many varieties of horses roamed in herds over the vast steppes of the continent. In vast herds, with complex societies and feeding on the seas of grass, they lived and died for centuries. Eventually, mankind roamed in and developed a relationship with one particular species.

Humans started to domesticate equus ferus around 4000 BCE. After another thousand years, this species, equus ferus, started to become more widespread. They outcompeted the other wild horse species, and one by one, they went extinct. The domesticated horse was the last horse standing. 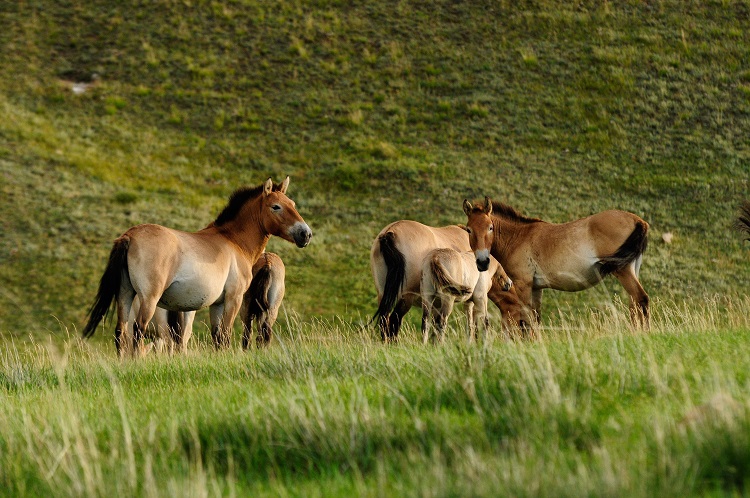 Except for one species. A hardy, little black and tan horse called Przewalski’s horse, or the takhi, managed to survive in what is now Mongolia. The horses are specially adapted to the tough environment of Central Asia. They have managed to remain a separate genetic species. Other wild horses, like the Australian brumby or the American mustang are the descendants of domesticated horses that escaped. The Przewalski’s (pronounced zhu-wall-ski) horses are the only truly wild horse left on Earth.

The takhi, as they are known in Mongolian, were known to the Mongolians for centuries. Takhi in Mongolian means “spirit, or worthy of worship”. They were first written about by a Tibetan monk called Bodowa who discussed them in his writings. The horses remained unknown to the western world until a Polish-Russian explorer named Nikolay Przevalski described them. He was born in Smolensk, in Southwest Russia, and after studying at the Military Academy, he became a geography teacher in Warsaw’s military school.

In 1867, Przevalski asked to be sent to Siberia to explore a river basin on what was then the Russian-Chinese border. He was a player in The Great Game between Russia and England in the 19th century for control over Central Asia. He helped Russia discover more about Central Asia in an attempt to understand it’s expanding empire.

He would go on to make four trips to Central Asia. His absolute goal was to reach the city of Lhasa in Tibet. He never made it there, but did describe many things on the way. He was a part of the Russian empire and espoused some opinions of people that would not be acceptable today, however he was an intrepid explorer. Through his trips he saw and described a gazelle and the wild Bactrian camel for Russian scientists. These animals, including the takhi, are now endangered.

Takhi are well suited to life on the steppe. Their stocky frame allows them to store and hold more fat. They are not very large. Since they do not usually grow taller than 5 feet, or 142 cm, they generally make do with less food. This is similar to the Mongolian horses in general.

Takhi are different from regular horses by having a shorter mane, larger head and neck and shorter tail than domesticated horses. They are hardy horses as well, able to withstand the worst of the Mongolian winter. Temperatures can drop to 40 below, which would probably kill most other horses. 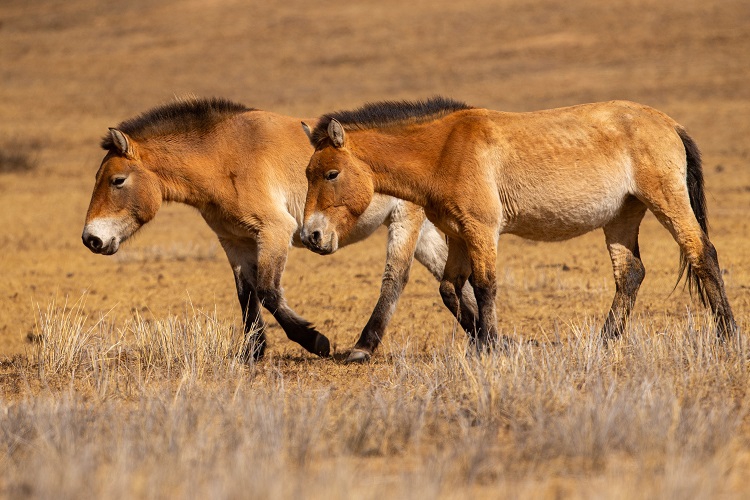 The takhi’s social structure is also very strong. They generally move in herds of female horses where there are dominant mares with one male stallion guarding them. Researchers track the dominant mares. The harems are groups of 5 – 15 horses, which helps increase genetic diversity. These abilities give the Takhi an edge for survival in this harsh environment. 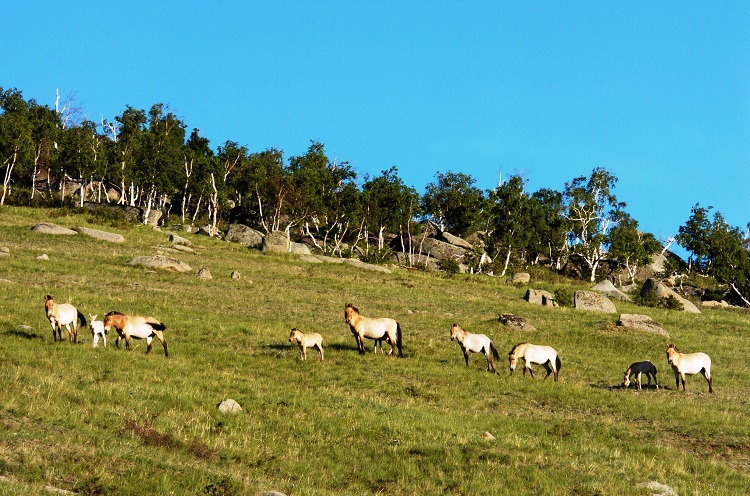 Unfortunately, despite being well suited for the steppes, the Takhi were unsuitable for the changes that Communism and modernism brought to Mongolia. Their population decreased as they were forced to move away from their main habitat, and they were hunted for their meat. Local people used guns more frequently than before, and a rebel group in particular used the Takhi as a source of food.

The last wild horses on Earth were effectively extinct in the wild. The last time anyone saw one alive was 1969. People mounted several trips to see if they could find the wild horses again, but they were unsuccessful. The little horses were well and truly gone from the wild.

They did live on in zoos. Many explorers took foals from the wild and brought them back to Western zoos. P-horses, as they’re sometimes known, require a lot of space. Many animals died in the confines of captivity. After some work to breed them in zoos, they were able to build up a small population.

With the help of zookeepers in the west, where the Takhi were living, they were able to breed them out of captivity and reintroduce the horses to the wild. The first Takhi were brought from foreign zoos in 1992. On June 5th, researchers and conservationists led 15 horses into an area about fifty miles away from Ulaanbaatar. Today, there are around 320, thanks to consistent reintroductions and breeding programs. 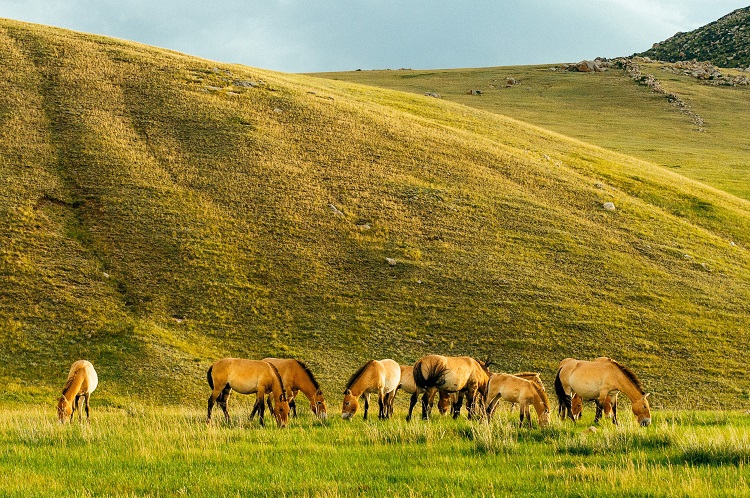 Two men are credited with helping to bring back Przewalski’s horse – Jan Bouman and Dr. Tserendeleg Jachin. The two met in Mongolia in 1990 and likely bonded over a shared interest in conservation. Jan Bouman had created the first studbook, or list of breeding males, and started a horse breeding program in the early 1980s. Dr. Jachin traveled to Antarctica and started many environmental projects in Mongolia. One area that he focused on was the snow leopard. He helped create the International Snow Leopard Trust to help protect these rare creatures.

Between the both of them, they managed to convince several zoos to help them in their project to reintroduce Przewalski’s horse back into Mongolia. 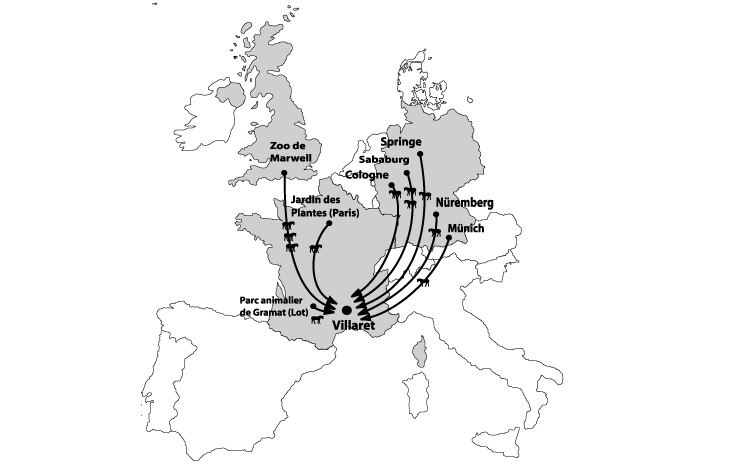 Today they can be found in several areas, but are most easily spotted at Hustai Nuruu National Park. It’s a two hour trek away from the capital and full of birds, lizards and other mammals; well worth the trip for any nature lover.