Imagine riding a horse over the Eurasian steppe, winter’s cold embrace around you and an eagle on your arm. You feel the bird twitch, and know that it’s got something in its sights. With a flick of your arm, the bird takes off and flies toward an unlucky rabbit. Before you know it, the eagle dives down and in its talons is lunch for your family. 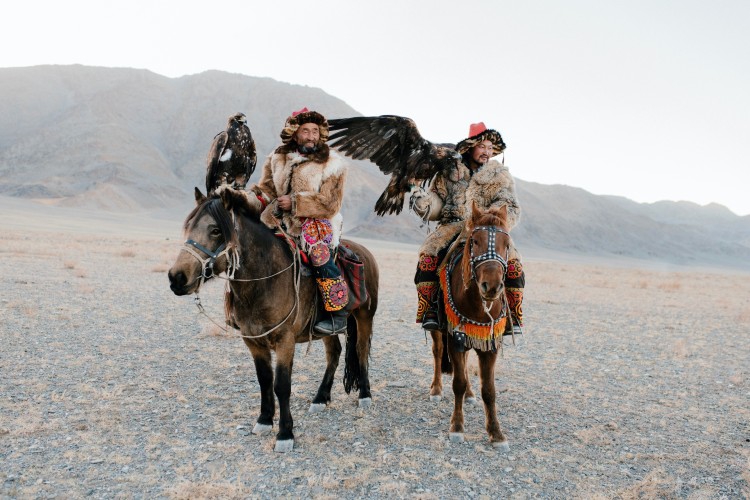 This is a scene that could be this year to thousands of years ago in Mongolia’s west. Eagle hunting has been a traditional Kazakh, Kyrgyz, and Jurchen (or Manchurian) activity for centuries. In Mongolia, eagle hunting is most associated with Kazakh people. Many Kazakhs live in Western Mongolia, around the Altai Mountains. Eagles are captured when they’re young and trained by their hunter. Eagle hunters climb to find the eagle’s nest and somehow distract mom or wait until she’s out hunting to grab the fledgling eaglets in a bag and safely bring them and the birds down. There are some cases of capturing a fully-grown eagle, but they are harder to train. Female eagles are prized for their size – a bigger eagle can bring back bigger prey.

During the summer, the hunters live with the birds and train them to follow commands. They practice by tying meat onto a string and encouraging the bird to catch the treat. The bird is rewarded with a morsel. The hunter and eagle pair go hunting, typically on horseback, during the winter.

Even though the eagle is seen as a helper in the arrangement, it’s a partnership. The hunter usually works with the eagle for two or three years until the eagles are old enough to raise a family of their own. They are released back into the wild and an eagle hunter has to find a new bird to form a partnership with. 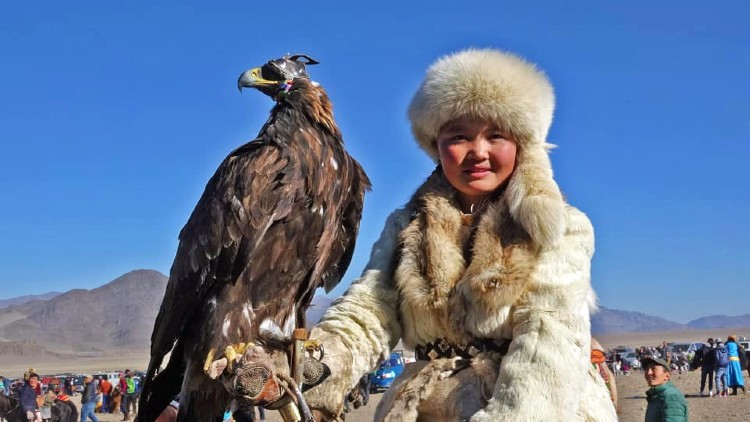 Aisholpan, the eagle huntress, is the subject of a 2016 documentary. She has the distinction of being one of the few women to win the eagle hunting competition in Bayan-Olgii. This makes her a bit of a celebrity in the Mongolian and Kazakh community. 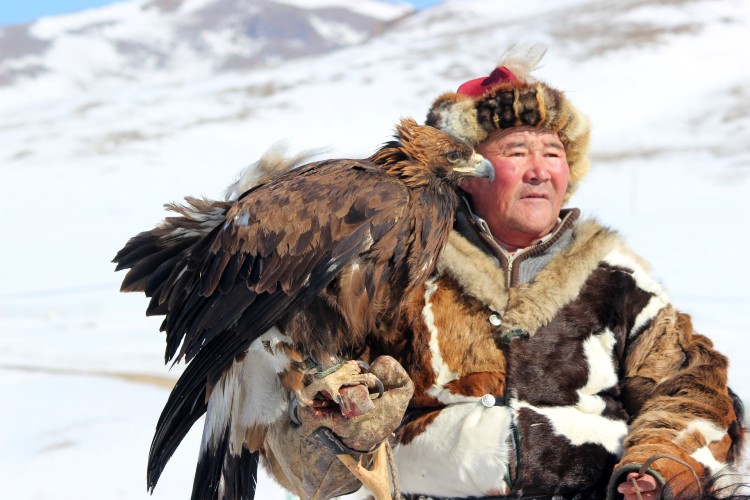 The major Eagle Hunting Festival is held in Bayan-Olgii in October, but you can get a taste of it in March outside of Ulaanbaatar. The capital city hosts a two-day-long version of the festival. There are some really fascinating ones, but the first is an eagle competition. A horse drags a small animal carcass across the steppe and a hunter releases his bird from a distance away. The birds are timed to see how quickly they can get the carcass and the fastest bird wins, and there is a contest to see how quickly trainers can get their birds to come to them. There are costume contests to see who has the best traditional Kazakh costume. One of the highlights is the tug of war over a goat carcass that will remind you a little of football played on horseback.

You can rent a ger at the event, and I would strongly recommend it. It’s nice to have a home base to recoup and warm up during the event. It also allows you to mingle with some of the eagle hunters as well, many of whom are happy to pose with you, and may even let you hold one of the eagles!

If you find yourself in Mongolia in March, be sure to check it out!

Hunting with Eagles in Mongolia

Hunting with Golden Eagles is 8-day adventure tour that will make you travel the time and experience...