Home Blog Post-soviet visuals of Ulaanbaatar- where to see the remains of the soviet art?

Post-soviet visuals of Ulaanbaatar- where to see the remains of the soviet art?

Since you have chosen Mongolia as your travel destination, you might be familiar with the fact that Mongolia is a post-soviet country. From 1921 to 1991, Mongolia has been part of the Comintern- a soviet alliance with Soviet Russia in its head. Most of the districts and urban structure of the city has been built during that era with the help of the Russian masters. Ulaanbaatar was mainly designed by Soviet architects, who have employed classicism. Even though most of the constructions built during that era have now been replaced by modern buildings, there are still remains of the soviet style buildings. You might see classic style buildings in places that hold higher value in Mongolian society such as The Ministry of Foreign Affairs, The State University and The State library with huge pillars that do little to the actual construction of the building except decorating it. Except this handful of buildings, the Ulaanbaatar’s architecture was dominated by simple five or seven floor apartments usually built by bricks and has rectangular shape to minimize the cost, and to be as time-effective as possible. However, the architects’ artistic eye and creative style is still visible to us, in form of the brick decorations or murals in the walls of these simple buildings. The pixel-style brick decorations might seem funny to look at, but they used to hold great value for the residents. Some were decorated by beautiful murals since the plain, linear walls were perfect background for them. If you’re in search for some old-school, soviet visuals, Ulaanbaatar would be the perfect place to seek them while still having access to the common comfort you might have been got used to. 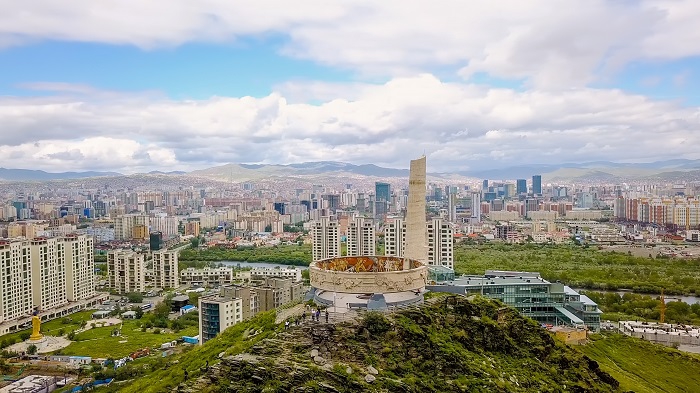 Now hidden behind the big entertainment center “Zaisan Hill”, stands a monument on top of the hill. The sculpture of a soldiers and mosaic placed in a circular fashion surrounding the top of the hill is the memorial for the allied Mongolian and Soviet soldiers killed in World War II. The mosaic tells a story of the alliance of Mongolian and Soviet countries- accenting the most crucial events during that time, starting from 1921 when the Soviet has helped Mongolia gain independence, continuing on to the war against Japanese in 1939, and celebrates the WWII victory. Alongside these murals, there is some celebrating the scientific and technical achievements of the two countries too, including the first Mongolian cosmonaut’s flight to the cosmos with in a soviet spaceship called Soyuz 39.

There used to be a tank on bottom of the hill, which represents the tank army presented to the Russians from the Mongolians. However, due to the construction of the entertainment center, it has now been replaced by the monument of the Soviet soldiers. You can go to the top either by walking through the stairs which is around 600- Mongolians each have counted it differently and has not yet decided on the exact number, so try it yourselves too!, or by the glass tunnel from the entertainment center if you don’t feel like climbing up. However, I would recommend walking up the ladders physically to enjoy the view and to have a look at the notes written by the locals. Once you got up there, you would have a full view of the Ulaanbaatar alongside with the murals and sculpture. 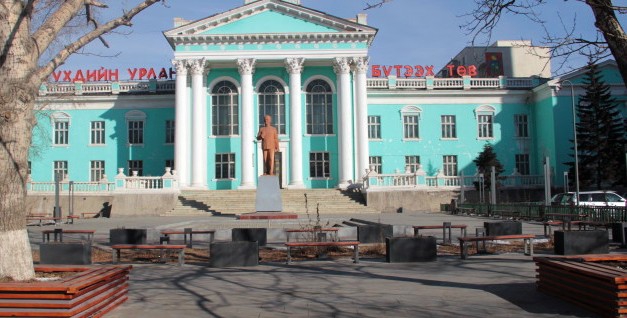 Mongolian Children’s Creative Center is also a great representation of the soviet decorative building. With its pretty mint green color, address written in big, bubbly font and a sculpture of a “pyonor”(soviet name for the student)- it’s obvious that the place has been built for the children. As mentioned before, these kinds of places usually employ western classic style with decorative columns and vertical position. Built in 1958 by Mongolian architect Dambiinyam B.,   the building is a must see for the tourists. However, the building is also a huge representation of the new wave of Ulaanbaatar’s urban structure and architecture since it’s in danger of being privatized and demolished to widen the road.

Some of the remains of the soviet architecture are in danger of demolition like Children’s Creativity place while some are already has lost the battle through time and revolution like a Zaisan monument being overlooked by a modern entertainment center. These two are great examples of the soviet architecture in Ulaanbaatar, but by no means the only ones. That’s why you can see the murals around the city if you pay close attention; there are few apartments that don’t have some decorations on its walls. Some of the notable ones are one in the 19th district showing a little herder girl with lamb, or a happy worker’s family and a presentation of the soldier and a policeman in the Officer’s place. Since there have been no effort made to restore the old ones or keep the ones in good condition, most of the other ones are fading from the Ulaanbaatar’s face. So, make sure to keep an open eye in order to catch some great memoirs of the soviet era saved in the walls of the buildings.