Mongolia has a rich culture, and one of the most well-known aspects is its music. With interesting instruments and mesmerizing vocal techniques, Mongolians over the centuries have developed a unique sound to express their lives on the steppe. There are many elements to learn about, however, we’ll just give you a primer on what the basics are. If you decide to visit Mongolia, you should definitely take the opportunity to hear a live musical performance; it’s definitely worth the flight to get in!

One of the most obvious symbols of Mongolian traditional music is the morin huur. It means horse-head fiddle. The wooden instrument is often finely decorated, and has a carved horse at the end of the instrument’s neck. There are two strings, tuned a fourth apart, and the strings are made up of horse hair. There are no frets, and a player holds the string on their nails while they pull a bow across the strings. Both strings can be played at the same time.

The sound is akin to a violin, though typically played more like a fiddle. Skilled performers can also produce a sound like a neighing horse. Players utilize both strings and there can be ensembles of morin huur players to cover the different parts. The player usually sits on chair to play, and can sometimes sing along while playing. There are a number of places you can buy student grade instruments and learn to play this instrument. 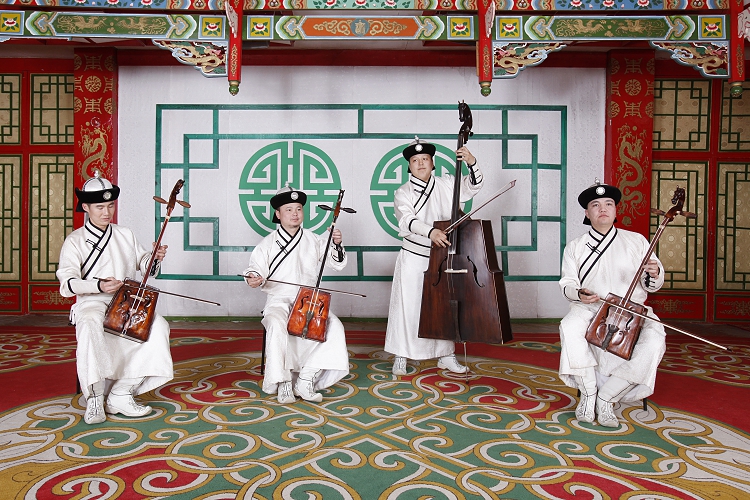 Another of the more well-known aspects of traditional Mongolian music, throat singing is amazing. Singers use their vocal cords to produce both a regular tone and an overtone, making two or even three sounds at once. Sometimes it can sound like a whistling, or other times a lower growling while a drone note sounds. This technique is popular in the Western side of the country.

This very difficult technique is not something you can easily master. Singers take years to develop the technique. Hearing it live though is definitely more impressive than on a recording though. During a live performance you can hear higher and lower tones than a recording can capture, and the mesmerizing performance is something you won’t soon forget.

The Mongolian Long Song, or Urtiin Do is aptly named. While the songs can be very long (literally one of them can take up to three hours to sing completely) the long also refers to the syllables of the words. Singers draw out the vowels for multiple breaths. The instrument accompanying the singers depends on where they are from. Typically, in the east, they use the morin huur, however they can add a flute. In the Western areas, Oirat groups use the igil, a similar instrument.

The songs are typically very old. They cover philosophical, religious, romantic or songs about mom and home and horses are often sung about. There are three different styles, the minor long song, the ordinary and the major songs. These refer to the style and techniques of the performance, rather than the length of the song.

One of the most interesting examples of the long song is one that herders use to help a mother camel. Occasionally, the mother camel may stop producing milk for its baby. When this happens, herders sing the Ingen Temeenii Duu, a song that moves the camel so much it starts to cry. The crying encourages some kind of fluid production in its body and the mother camel begins to produce milk again for the baby camel. While this may seem like a tall tale, it has been documented by third parties.

In 2005, UNESCO declared the Mongolian Long Song as one of the parts of the Oral and Intangible Heritage of Humanity. Don’t take their word for it though, visit and see a performance yourself. You’ll be guaranteed to be blown away. Seeing performances of these songs will stir your emotions and also impress you with the musicians’ technical ability.

There are many more parts to Mongolian Traditional music. It’s a large genre with fast and slow songs. In Ulaanbaatar alone there are dozens of places to enjoy performances, but there are two available every day at a concert venue near the Children’s Palace. If you’re lucky, you can see one on a train, or even out in the countryside.